View All All
Next →

Pullman Magenta Shores Resort resides on the Aboriginal Land of the Darkinjung people. Pullman would like to acknowledge the traditional custodians of the land upon which we live and work and pay our respects to the customs lore/law, history and practices of the ancient people of this land.We also pay our respects to the elders, past present and future.

Aboriginal Territory
The inland Darkinjung people's territory extended from south of the Hunter River to as far north asWollombi. South of the Hawkesbury were another inland group called the Dharruk people. TheKurringai people lived around Broken Bay, from North Sydney to Newcastle. At Newcastle theymerged with the Awabagal people who lived in that area. Another two tribes that merged werethe Kurringai and Thurrawal people on the Sydney peninsula. The Darkinjung and Kurringaipeople had a business relationship, coming together to trade. This facilitated a close, cooperativerelationship between the two tribes. The Kurringai people would move inland into Darkinjungterritory to hunt kangaroos and emus during winter. This territory sharing was reciprocated, withthe Darkinjung people using their relationship with the Kurringai tribe to move down to the coastand enjoy seafood feasts in summer. Relationships between tribes was not unusual. For example,tribes that inhabited coastal regions would exchange spears with inland tribes for clothing madefrom possum fur.

The Darkinjung People
The Darkinjung people were an inland group whose territory extended from the Hawkesbury River northwards about 60km to Wollombi and the Hunter River. Their neighbours in the south and east were the Kurringai, in the southwest the Dharug, and to the north of Lake Macquarie the Awabagul people.

Darkinjung Food
Archaeological excavations reveal that the Darkinjung consumed a lot of seafood, primarily during the summer when the fish were abundant. They were mostly snapper, bream, leather jacket, rock cod and groper. Women used fishing lines and men used spears to catch them. During the winter the Darkinjung turned more to the land, eating animals such as potoroo, emu, kangaroo, quoll, echidna, flying fox, wallaby and wallaroo. Wombats and koalas were not eaten much, if at all. They would also eat burrawang palm seeds, yams and the roots of some ferns.

Darkinjung Weapons and Tools
Men used spears, spear throwers (woomera), clubs (waddy), wooden shields, boomerangs, stone hatchets and fishing spears (mootims). Women carried items in string bags and coolamons (wooden vessels). The string or net bags were made from a knotted mesh of fibrous cord and were used to carry food and fishing gear. These bags were often slung from the forehead and hung down the women's backs. Canoes were made from a sheet of bark, skewered at each end and plugged with xanthoroea gum.

Darkinjung Dwellings and Dress
Darkinjung dwellings, usually in groups of eight or nine huts, were constructed from sheets of bark flattened and supported on timber frames. The Darkinjung also used rock shelters, usually with a northeasterly aspect to best capture warmth and light from the sun.
Men usually dressed in a long cord of possum hair wound many times around their waists and from which three or four strips of possum skin, approximately 22cm long, hung down the front, back and from the hips. Women wore blankets or cloaks made of several possum skins.

Darkinjung Arts
Art played a very important role in instruction in tribal mythology and values. The Hawkesbury engravings, including those found at Walkabout Park, are thought to be among the richest and most varied in the world. The extensive sandstone platforms of the area provided ideal surfaces for the art form. There are over 4,000 engravings, stencils and paintings in this
area. Emu flesh was much sought after by Aborigines, so it's not surprising that the emu depicted in the rock carving at Walkabout Park has been speared. The emu was regarded as the mother of Daramoolen, one of the creator deities of the coastal Aborigines. 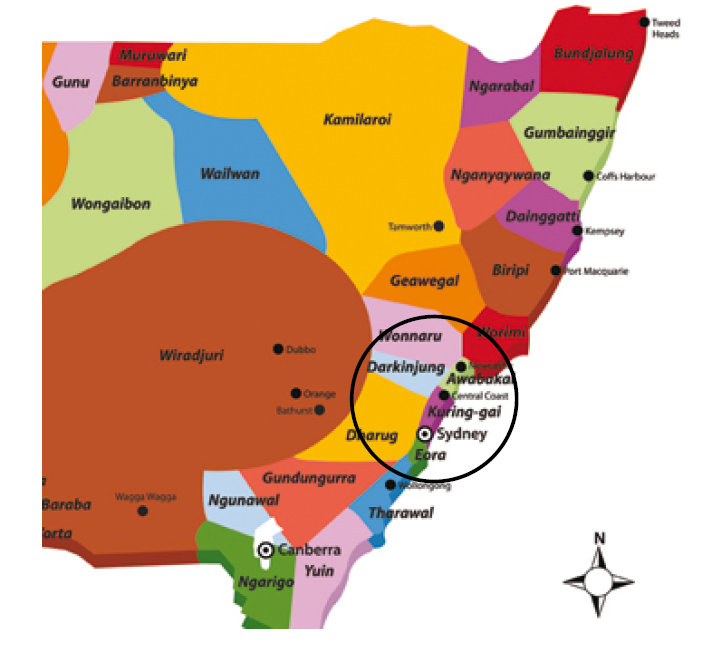